Yano Research Institute has conducted a study on the global power module market with the following conditions:

What are Power Modules?

Power modules are used in industrial devices, new energy, automobiles, trains, etc., and are required for inverter/converter circuits in the devices mounted within.  There are various types of products according to the circuit structures so that specifications of those modules, including pressure resistant/electronic current values, size and number of power semiconductors to be implemented, vary.

Power modules in this research include IGBT (Insulated Gate Bipolar Transistor) module, IPM (Intelligent Power Module,) and MOSFET (Metal Oxide Semiconductor Field Effect Transistor) module. An IGBT module is several IGBTs, which are power semiconductors needed for power exchange, packaged together with multiple diodes into a special case. (If MOSFET are packaged into a case with diodes, such a module is called a MOSFET module.) An IPM (Intelligent Power Module) is an IGBT module embedded with protection network to protect against excess current and excess heat.

The global market of power modules in 2017 is expected to attain US$4.09 billion, up by 8.5% from the previous year, based on the shipment value at manufacturers. The demand of power modules had continuously been stagnant from the latter half of 2015 to the first half of 2016, but has turned for the better since the latter half of 2016 to 2017.  Due to favorable sales in the first half of 2017, it is highly probable to attain positive growth when viewing the results throughout the year.

CAGR of the global power module market from 2015 to 2020 is expected to be 9.1%, attaining US$ 5.84 billion by 2020, based on the shipment value at manufacturers. The market is likely to be on the rise since 2017 and to achieve a double digit growth starting from 2018.  The global power module market is likely to be led especially by the sectors of automobile, with PHVs and EVs likely to increase sales volume encouraged by the environmental regulations and their low-fuel consumption, and of major appliances (or so-called “white goods,”) driven by wide acceptance in the market of emerging countries. 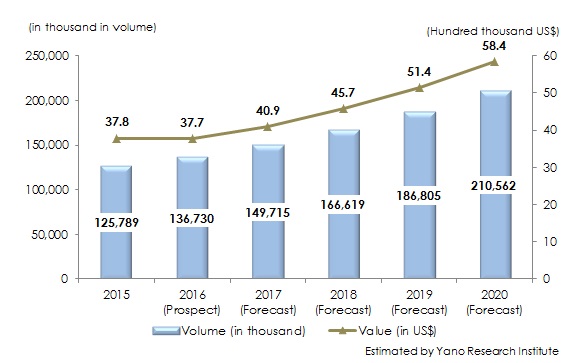