Yano Research Institute has conducted a study on the smartphone game market with the following conditions:

What are Smartphone Games?

What is the Smartphone Game Market?

The domestic smartphone game market, based on the sales amount at game makers, has grown steadily to 103.4% of the size of the previous fiscal year to achieve 925.0 billion yen in FY2015. In spite of stagnant sales of those game applications that had once attained smash hits, represented by ‘Puzzle & Dragons’ released in 2012 and beyond, continuous marketing of complete, in-house contents by some of large household video game makers, and emerge of multiple game titles making a certain level of success, though not mega hits, have led the domestic smartphone game market to a stable growth.

In the current situation where game titles becoming more difficult to make a hit year by year, smartphone game makers are required to be skillful in technology of development of games to the level sufficient enough to be the same as those of household gaming machine makers, and are needed to secure enough human resources. In addition, they are required to have multiple product lines to be developed and operated simultaneously. They also confront soaring expenses as the development period prolongs. The companies that can overcome such challenges are so limited that small companies are considered to be overwhelmed by larger companies, whcih may eventurally cause an oligopoly consisted of those leading game makers that possess profitable contents.

Many home video game makers have shifted to develop smartphone games. Because of those factors including Nintendo’s full market entry since 2016 and an expectation of the company’s eager development of successful contents, the domestic smartphone game market in FY2016, based on the sales amount at manufacturers, is projected to attain 945.0 billion yen, 102.2% on year-over-year basis, and to achieve 960 billion yen by FY2017, 101.6% on Y-o-Y basis. 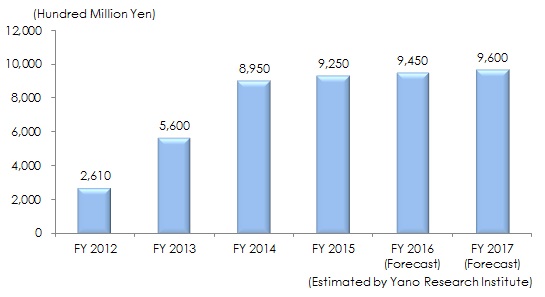