Yano Research Institute has conducted a study on the smartphone games market with the following conditions:

What are Smartphone Games?

What is the Smartphone Games Market?

Size of the domestic smartphone games market, based on the sales amount at game makers,  has grown to 895.0 billion yen in FY2014, remarkable 159.8% of the size of the previous fiscal year. Continuous popularity of the game applications, such as ‘Puzzle & Dragons’ released in 2012 and ‘Monster Strike’ released in 2013, have boosted the market. What was only 48 billion yen in FY2011, size of the smartphone games market has expanded immensely over the last four years.

With the environment surrounding smartphone games changing at high speed, there is no denying that new games with innovative technique may keep on emerging one after another to attract users. However, the current environment requires the game makers to possess technological ability to develop the games for home video game consoles, as well as affordability to bear cost increase, secure human resources, and have multiple number of development lines, in order to prepare for lengthening development period, all of which can be attained by only a limited number of game makers able to cope with severe conditions and to provide attractive contents. Therefore, the market is likely to be oligopolistic.

Many home video game makers have shifted to develop smartphone games just as the largest enterprise of such game makers is scheduled to enter the domestic smartphone game market in 2016. They quickly gained popularity by making their existing game titles available to play on the smartphone devices. Therefore, the market has a sufficient environment to cover the potential loss whenever the fans of curerently-popular applications decrease. Since steady growth is expected to continue, the doemstic smartphone games market is likely to attain 945.0 billion yen, 102.2% of the size in the previous fiscal year. 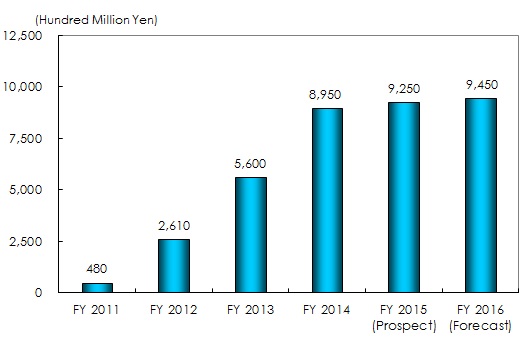