Yano Research Institute has conducted a study on the domestic shoes and footwear market with the following conditions:

<What are Shoes and Footwear?>

Size of the FY2015 domestic shoes and footwear retail market attained 1,415 billion yen, 100.8% of that of the previous fiscal year.  In spite of men’s and women’ shoes failing to reach the previous-fiscal-year results, the favorable sales of sport shoes and children’s shoes have driven the entire market size, especially because the sports shoes, the category of which occupying 40% of the entire market, have attained the positive growth for four years in a row due to the recent sneaker boom.

The domestic shoes and footwear retail market in FY2016 is projected to scale down to 1,390 billion yen, 98.2% of the size of the previous fiscal year.  The decreased demand from foreign visitors and declining sales tendency of men’s and women’ shoes are likely to shift the market to negative growth.  On the other hand, however, the sports shoes market is likely to keep being on the rise to attain 643.0 billion yen, 103.7% on year-over-year basis, due to steadfast demand of casual sneakers, though the growth rate of the market may somewhat slow down. 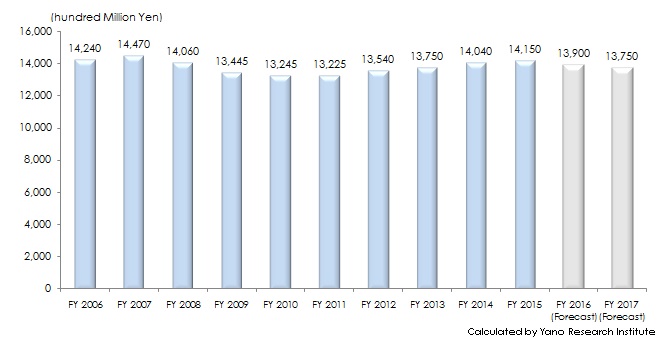